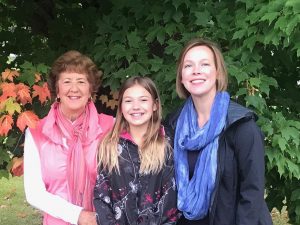 Presque Isle, Maine—On October 1, Zoey Violette and her mother Gretchen Violette will appear on stage to represent the Wintergreen Arts Center at The Band Visits Cariani, a benefit performance in New York City featuring an evening of scenes from plays written by accomplished playwright and actor John Cariani.

Proceeds from the one-night-only event will benefit the Wintergreen Arts Center in Presque Isle, Cariani’s hometown.

Zoey Violette has participated in a variety of arts programming at Wintergreen including the Center’s 2017 production of the children’s musical, We Are Monsters with Director Darci Faye, where she discovered her passion for the performing arts.  Violette has gone on to hone her acting and singing skills with other local performing arts groups.

“I’m really excited to see John and the performance,” said Zoey Violette.  “I love being on stage and never thought I’d get to be doing something this cool.  It is super amazing for Wintergreen.  This stuff just doesn’t happen every day.”

The Violette family members are lifelong friends of John Cariani and long-time Wintergreen supporters and volunteers.

“We are so proud to have Zoey, Gretchen, and Margaret represent us in New York,” said Dottie Hutchins, Wintergreen’s executive director.  “What John Cariani is doing to support the Wintergreen Arts Center and arts appreciation in northern Maine feels almost like a miracle.  John’s connection to Presque Isle and the Violette family makes it even more special to have Zoey and Gretchen up on that stage to extend our gratitude.”

Although Hutchins will miss the October 1st benefit presentation of The Band Visits Cariani due to programming obligations at Wintergreen, she will be attending John Cariani’s last performance in the 10-time Tony Award-winning Best Musical, The Band’s Visit, on Sunday, October 7.

John Cariani is leaving The Band’s Visit so he can devote more time to his writing.  He is currently turning Almost, Maine into a novel which will be published by MacMillan in the coming year.

For more information and to donate, please visit:  https://www.gofundme.com/support-wintergreen039s-new-vision

About Wintergreen Arts Center:  The Wintergreen Arts Center is a 501(c)(3) nonprofit organization founded in 2006. It is located in downtown Presque Isle, Maine. Wintergreen is an organization based on the idea that creativity, advocacy, and community can produce great things. Our mission is to provide meaningful experiences that encourage an appreciation of the arts, stimulate creativity and innovation, and offer an artistic community space where all are welcome.